The analogy I had been using over the past few months to describe the action in the market to my members is that of a majestic skyscraper, each story beautifully built, higher and higher to the heavens. Just one problem.. they skimped on the foundation.  So, as the glorious skyscraper neared the heavens, the foundation began to crack, piece by piece by piece with each passing day.   As dignitaries and VIPs arrived to celebrate the completion of this majestic masterpiece with a ribbon cutting in Ben’s Liquidity Lounge, it tilted ever so slightly.  It was barely noticeable, but those that did, chalked it up to thin air and one too many trips to the punch bowl.

The charts never lie.  As the rally continued to soar to epic heights, the charts began to reveal the warning signs well ahead of the crash.  Granted, this has been a historic, Fed fueled, artificial rally where minor topping patterns failed again and again as the market pushed higher and higher with considerably less conviction.  That began to change in January, when institutions began to unload positions which was revealed in the heavy volume on the sell side.  I have to admit, I thought there was a very good chance of topping in February following the January plunge, but was forced to abandon the plan to get aggressively short on March 4th.

I sent the following note to members:

“With very little conviction on the buy side I’m still skeptical of this market, but with last Thursday’s reversal day and the inability of the bears to run today, that skepticism continues to diminish and the odds of retesting the 2010 highs soon are growing by the day.  I continue to close out short exposure and today added a few longs for the first time in awhile to get more to the neutral side.”

Within a few days the market continued to push higher with no buy volume and the market was running up to new 2010 highs.  As CNBC paraded bullish analyst after bullish analyst, some even calling for a retest of all time highs, the cracks began to appear.  The first major crack occurred on March 25th with a high volume reversal day. I began to sound the caution alarm:

“The cracks in this rally are beginning to appear.  While fairly subtle they are there as the Nasdaq battles the 2400 area and the Dow battles the 11,000 level which it nearly hit today.  Today was the biggest crack I’ve seen since this rally began on Feb 5th as the indices wiped away strong gains to close flat.  The Naz was up more than 30 and closed in the red.  While volume wasn’t all that intense on the sell side, today marks a higher volume reversal day.  Days like this always sound the caution alarm for me.  No, it wasn’t a dramatic, definitive reversal but it likely indicates this leg of the rally is on its last legs.“

The next crack appeared on March 31st: “Volume was not great on the sell side today, but it was a bit heavier than yesterday’s volume, so technically we had a day of distribution today.  That’s another subtle clue of caution.”

About two weeks later, fear continued to plummet as the market began to extend to extreme overbought conditions and when you have those kinds of conditions in place, the correction is near as I highlighted to members on April 12th:

“Outside of the overbought conditions, we have tremendous complacency in this market as revealed by the VIX which is at levels not seen since the height of the bull market in 2007.  ALL of the concerns that cropped up in 2008 are clearly out of the minds of most and that doesn’t bode well for the bulls as the Dow and S&P negotiate the next tough levels of resistance at 11k and 1200 respectively.”

It really felt like at that time, all the market needed was some kind of catalyst to topple it.  On April 16th, it began with Goldman Sachs.  News of the SEC fraud case led to the largest day of distribution in more than 6 months, creating yet another warning signal. I indicated to Self Investors members that while I was skeptical of the news being “the” event to topple it, it would be a big weight around the neck of the bull:

“One day certainly doesn’t make a trend, but I do have a feeling that the Goldman event may just be a significant weight around the neck of the bull.  However, I don’t see the Goldman news as “the” event to send this market into tailspin.  I’m more concerned about the debt issues and credit ratings in Europe.”

The common argument from perma-bulls was that the Europe situation wouldn’t matter to US markets, proceeding to compare Greece to a small US state.  However, as we saw in 2008 with the collapse of one bank, then another .. and.  Yeah, these kinds of things tend to domino and I think the market recognizes this… at least eventually.  It was a really strange end of April and on into May as the market yo yo’d back and forth, between high volume distribution days (more red flags) and weak buying.  One morning it was Greece bailout optimism, followed by concern nothing would get done.  While the indices remained in a fairly tight range, volume levels continued to reveal that the foundation of this market was beginning to crack in a big way and on May 4th, a gaping hole appeared.  My report to members on the night of May 4th summarizes my thoughts and warns of the coming correction:

“What a wild few weeks eh?  Up down and all round with increasing volatility and volume.  It happens at market bottoms as well as market tops, frustrating the masses including myself.  I don’t believe I’ve seen anything quite like what we’ve had in the past two weeks with the market in schizo mode, rallying on Greece optimism one day and plummeting the very next with big volume.  It’s unusual to have so many consecutive big moves and not make any progress.  As you know, I’ve been increasingly bearish in recent weeks due to the increasing number of distribution days as well as the extreme overbought conditions on the monthly and weekly charts.  I have been building and building short exposure, slowly but surely… AND wondering yet again whether that was such a good idea by yesterday afternoon after the market failed to roll over yet again following Friday’s high volume plunge.

Today reveals the bears are emerging from hibernation and they’re starving.  The mauling was on display and for the first time since the rally began in early February, we have a significant technical breakdown and the indices are on the verge of rolling over.  Today marks the eighth day of distribution in the past month and the fourth in about the last two weeks.  Granted, this is a mighty unusual market and distribution days haven’t mattered much over the past year, but in any other year that means a correction is underway.  If nothing else, I think today provides the signal to sell in May and go away for awhile and see how this market plays out for a few weeks.  If you’re comfortable shorting the market, I think there will be easy money made on the short side.”

Last week, the foundation disintegrated with the Dow plunging 1000 points in a single day fueling speculation as to what exactly caused the dramatic plunge from around 300 to down 1000 in minutes.  While I tend to agree with those that think the fat finger scenario is ridiculous, does it really matter what caused the plunge?  Regardless of the cause, the plunge completely shatters investor confidence at a time when confidence has already taken a beating.  Following the 2000 collapse, the 2008 collapse and now the 2010 mysterious plunge,  how many people are going to completely get out of the market?  How many boomers are fed up with the market and want to preserve what’s left of their nest egg with less volatile investments?  Whether the market dropped because of a fat finger, a computer glitch, a coordinated hack or just good old fashioned panic taking out sell stop after sell stop, trust in the stock market and in Wall St continues to erode and that’s never a good thing.

So what now?  In my opinion, I think the indices may be carving out a big head and shoulders top.  I’ve included a chart of the S&P below to outline what we may see in the coming months. 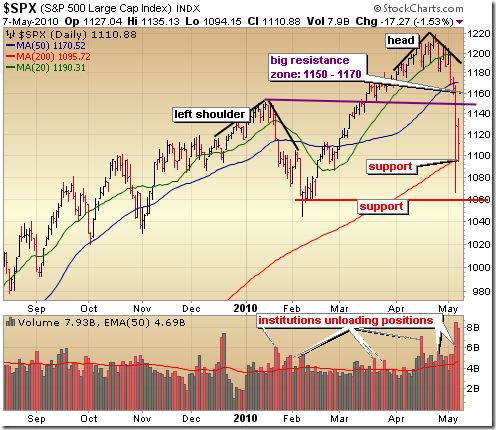 If indeed what we’re looking at is a big head and shoulders top in the making, the left shoulder was formed during the Jan/Feb sell off, the head formed on a low volume advance to new 2010 highs, followed by the steep plunge we saw last week.  At some point, I see some kind of relief rally to carve out the right shoulder with the top of the shoulder formed somewhere in the area of resistance between the Jan high at 1150 and the 50 day moving average around 1170.  There is clear support at the 1100 S&P level, so we could hold there and begin forming the right shoulder.  If that level doesn’t hold, look for a test of Thursday’s low and possibly the Feb low.  (Breaking: With the IMF just approving a Greece bailout), futures are up significantly, so the support at 1100 scenario is looking much more probable.  Should we get that run up to the 1150 – 1170 I will look to add back much of the short exposure closed on Thursday and Friday.   Good trading out there and be careful on the long side.