What is the General Market?

S&P 600, Russell 2000
Indexes comprised of much smaller companies than Nasdaq; the majority of the stocks I follow

These are the indices that will be watched for confirmation of a new bull market or signs that the bull has run its course and the bear will soon be in charge.  The links above provide you with a chart of the index.  Each day, it’s important to look at the price and volume action as well as support and resistance areas on the chart.

Market cycles tend to follow the health of the economy, but keep in mind that the market always looks several months into the future.  In other words, bear markets end while the economy is still struggling and bull markets end before recession hits.  Bear markets are necessary to clean up prior excesses and the clear the way for a new bull market with new leaders.  The frenzied stock buying of the late 90’s and the subsequent crash thereafter is a great example of "the greater the rise, the greater the fall".

OK, so how do you time the market so that you are fully invested long in a bull market while staying in cash and/or shorting the market in a bear market?  There are clues you can look for to help you determine the direction of the market.  The price and volume action of the market and leading stocks are of primary importance.

Price and Volume Action of the Market

Characteristics of a Market Top

Example:  the chart below shows the distribution and churning at the top of the market in March of 2000.. right before the big crash. 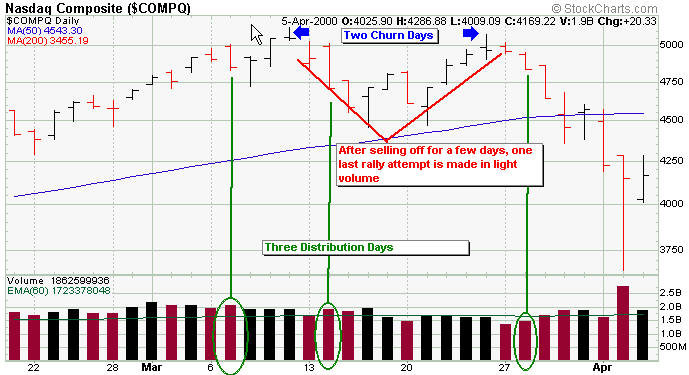 Characteristics of a Market Bottom: Signaling a New Bull Market

Rules for confirming a new rally are as follows:

1.  A rally attempt begins on a day when the market closes higher
2.  On the 4th – 7th day from the initial increase in the market look for a follow through (a 2% or more gain on heavier volume than the day before.. preferably above average).  A follow through may occur on any of the three indices to qualify as a rally confirmation.

The following chart shows the confirmation of a rally on March 17, 2003 that kicked off the new bull market)

The Action of Leading Stocks

A second very important indicator is the action of leading stocks.  Every bull market needs leading stocks breaking out to new highs from sound bases.  As a few of these leaders start to break down, the general market may not be far behind. Here are the signs a leader is running out of gas:

As the bull run comes to an end, the action of leading stocks may provide clues for you to get out before the rest of the market tanks. Some clues to look for

1. Start counting your bases after the stock reaches $10/share (before splits)
2.  To qualify as a base it needs to occur after a prior uptrend of at least 30%
3.  Bases must be at least 7 weeks in length
4. The base must be a correction of more than 20% to qualify
5.  In order to reset the count, the stock must undercut the lows of its most recent base and remain there for a considerable period

Example: The chart below highlights the three bases formed and the subsequent failure after the third base in Teva Pharmaceuticals.  Notice the break below the 200 Day Moving Avg (Red Line) on high volume for the first time in nearly two years.  If the failed breakout didn’t entice you to sell, this red flag should have been your final clue!

Example:  You can see the frenzied buying occurred on December 29, when the stock surges $32/share on 3X the normal volume on an Exhaustion Gap (the stock opens higher than the previous close due to buying in the after hours market).  The very next day you see a major gap up, before a Sharp Price Reversal. (Sell Signal #1).  Two days later, there was another large gap open, followed by another Sharp Price Reversal (Sell Signal #2).

Gauging the feelings of investors about the market is also important in determining the health of the market.  The reason for this is fairly simple.  If the majority of investors are bullish, there are few buyers left to power the market higher.  There is only one place for the market to go… down, as the sellers return.  If the majority is bearish, there are few sellers left to send the market down further.  Bargain hunters begin to smell an opportunity.  As more and more money builds on the sidelines, a positive shift in perceptions will usher in a flood of cash and lead to a new bull market.

In any sustained bull market, it’s necessary to have people concerned about the economy, interest rates or stock valuations.  These people sitting on the sidelines and/or shorting stocks provide a lot of capital down the road when they are finally convinced that the bull market is for real.  When they do, it’s at this time that you may have the makings of a climax top, tempting the pros to sell.  You should be selling too.

The following indicators help to gauge the feelings of investors about the market (however, keep in mind that these indicators are of secondary importance).  The price/volume action of the market, the action of leading stocks and interest rates are of primary importance.

Continue On to Industries Tutorial ::::: >